I still remember the first words I heard Dagmar, the love of my life, say.

It was the Fourth of July weekend in 2000. On my way home from a gig at 3:30 in the morning I happened to go past a buddy’s apartment. I was anxious to get home as I’d just bought my first house earlier that week. But I could see lights on and people sitting on his balcony, and I was still all wound up from the gig, so pulled my car around the corner and stopped, thinking to have a beer before heading home to my new house. I got my 130 pound carcass out of the car and headed up the street, still sweaty and grimy from hauling speakers, my hair blowing in the wind. As I neared the apartment I could see all my friends up there waving at me, and I heard a magical voice, accented with the mystery of far-off lands, say from the balcony:

“Who is dat homeless drug addict und vhy are you all vaving at him?”

A few minutes later I was sitting on the balcony enjoying the company of my friends. It turns out they were sipping beer, having a going-away party of sorts for one of our group, enjoying the summer air. “Oh, Chris, this is Dagmar. You know her, don’t you?”

“No, we’ve never met,” I replied, nodding across the length of the balcony to the woman with the accent. “I’ve heard of you, though.” We’d been running with the same circle of friends for six months, but had never seen each other in person. When I would show up at a gathering, someone would invariably say, “Oh, Dagmar just left, you should meet her sometime.” At the moment, the mysterious Dagmar was sitting in a puddle of shadow. And, it seemed, a puddle of water. “Are you wet?” I asked.

“Ja. I jumped into de fountain at dat fancy restaurant across de river.” I laughed and sat back to listen to the conversation meander around me. The group had gone out to eat as part of the going -away party and Dagmar thought the restaurant was too stuffy and pretentious so she took a dip in their fountain… After a while the party moved from the balcony into the living room. I found myself chatting with Dagmar and playing Trivial Pursuit (they didn’t give me credit for knowing where the pituitary gland is, which made me mad). Within minutes I fell asleep on the couch, letting the party wind down around me.

Our first impressions? It wasn’t love at first sight… Until she saw me close up she thought I was a homeless drug addict, then all I did was fall asleep on the couch (a talent I hold to this day — you show me a couch and I’ll show you how to sleep on it).

I’d bought my Little House in the Hood in June, and took possession of it on July 1st. I met Dagmar just a few days later, on the Fourth of July. I was planning to have a House Warming Party the following weekend. Every house needs to have something spilled on the carpet before it’s truly a home, you know.

“Dude, you gotta bring that Dagwood lady with you,” I told my friend a few days before my party. “I met her at your house, you MUST know how to get in touch with her somehow.”

“Dagmar. Her name’s Dagmar, not Dagwood.” My friend leaned back, sipping on his Guinness. “I can try to bring her, but I can’t guarantee anything.”

I reached in my pocket. “Ten bucks. That’s all I have.”

True to his word, my buddy brought Dagmar to the party. I somehow made sure to wrangle her a seat next to me at our impromptu jam session in the basement. We finally got to talk. I called her “Dagwood” three times.

The next week she started gradually moving stuff in.

Both of us were in our thirties. Both of us had been burned before. I was just coming out of a two-year-long depression caused (I think) by the messy end of a bad long-term relationship. Dagmar had just gotten back from a few years in Europe, where she had a bad experience of her own. We were both healing, but still feeling vulnerable…

So we negotiated. Was I ready for a relationship? Did she want one? What are the deal-breakers? Are we compatible? We did NOT dive into the relationship head-first, but rather waded into it with small, precise steps.

“Children. Do you vant children?”

Every question was impetus for a week-long discussion… By the end of three months, we were sure.

We were sitting on the Couch of Many Negotiations one night, watching the kitten chase invisible monsters across the room, when Dagmar suddenly got up and got something out of her purse. “Look at dis,” she said, handing me a box. “It’s been in my family for nearly a hundred years. Or sixty. Whatever, a long time.”

I opened the box and saw a simple, elegant, exquisite lady’s diamond ring. Very classy! “Very classy!” I said, admiring the ring. I put it back in the box and started to hand it back to Dagmar. She quickly stood up and looked the other way, not taking the box.

“You just keep dat for now,” she said. “Und any time you might vant to give it back to me, I’d be villing to take it…”

Two months later, “Vhere is dat ring? It’s not in any of your normal hiding places.” She picked up a stein from the shelf and peered into it. “Vhat are you doing with that ring?” I sat on the Couch of Many Negotiations and smiled.

“I thought you were peeking!” I said. “Now I know. Just never you mind what I’m doing with the ring. Put the stein down, it’s not in there.”

Two months later yet, “Are you nervous?” Dagmar asked me, kissing me on the nose.

“Yeah, I am!” I answered. We were backstage at the community theater. I was just moments from going onstage as half of a two-man show. “I’m nervous.” The show had just two actors, but there were fourteen characters. So me and my buddy Ross each had to play seven different characters, half of which were women. What this meant was that while one guy was onstage delivering a soliloquy the other was backstage changing costumes. Which means I had Dagmar backstage with me, helping me with the twenty-second costume changes. (And they were odd costumes indeed — for one character I needed to switch from blue jeans, T-shirt and bandana to wearing falsies, wig, dress and combat boots.) Dagmar peeked through a crack in the curtain. “Vhy are all our family and friends here at the same time?” she asked. “Almost everyone ve know is out there in the audience…”

The stage lights came up. Time to get moving… My first character was a cowboy…

An hour and a half (and uncounted costume changes) later I staggered offstage for the last time of the night. “You guys did vunderful!” Dagmar said. “It vas a great show!” The audience was still applauding.

“Yep, time to go do our bow,” I said, grabbing her hand. “Come on, let’s go.” The actors went on first, so Ross and myself went to center stage and bowed, then we gestured at the wings and our costumers came out and we all bowed together. The audience kept clapping.

“We have one more announcement,” said Ross, quieting the crowd down. “Here,” he said to me, sotto voce, passing a small box to me behind his back. I took the box, opened it, and motioned to Dagmar to join me center stage in the spotlight. “Honey, will you… wait, don’t pass out. Will you…” She looked at me with big eyes. “I asked your mama, she said it’s okay…” Dagmar numbly nodded, tears in her eyes. The crowd, mostly family and friends, went wild.

“I don’t want a church wedding,” I said. “Me not either,” agreed Dagmar. Over a period of weeks our wedding plans fell into place. We were gonna get hitched in the park.

The day of the wedding, August 11th, broke sunny and warm. I put on my black leather pants (that was the last day I ever squeezed my fat @ss into THOSE pants) and white shirt and got on my motorcycle and headed to the park. I got there before lunch, plenty of time… My parents and Dagmar’s mother had been there already, decorating and primping the place. I found the box I was looking for sitting in a corner under a bush. In the box were toys. Kites, frisbees, little nerf balls… I figgered if it was my wedding I wanted to have fun! So I spent the early afternoon in the park, flying a kite. 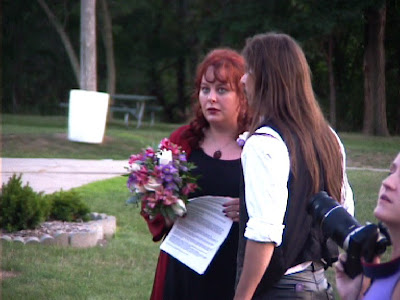 People started showing up. The Americans spoke English, the Austrians not so much, but they all understood, “The keg is over there and the toys are over here. Have fun!” Dagmar arrived, resplendent in the red dress my sister chose for her. We spent an hour or so getting our photos taken, then we called everyone together for the dinner. A fried chicken picnic in the park.

After we ate, we all went around the corner of the building to sit on the hill by the pond. My buddy Bryan started playing his guitar and the hitchin’ ceremony started. We had the whole ceremony translated into German as Dagmar’s family were all there. I’d written my vows in English, had them translated into German, and memorized them so I could vow myself auf Deutsch. Dagmar’s cousins grabbed a guitar and sang a wedding song in German.

The ceremony happened at sunset on a perfect night in front of a lake… The photo is really the way it was! That’s not a backdrop, that’s really real.

What you can’t see in the picture, though, is that there are train tracks just a half mile away. Not one but THREE trains went past while we were in the middle of the ceremony, blowing their whistles. I didn’t hear ’em at the time, but that’s one of the things everyone remembers about the wedding… I remember crying, seeing Dagmar cry, watching our friends all light candles on the hillside…

After the hitchin’ ceremony was over, we all went around to the other side of the building where my band was all set up and ready to play. We had a belly-dancer and a blues band — it was a good wedding!

That was all in 2001. Since then we’ve gone through a lot — a few medical procedures, a couple arguments, band changes, job changes, stress, and money woes… But what I remember most is that I’m not alone! We’re in this together, and we laugh a LOT, Dagmar and I. The world is a much more comfortable place knowing Dagmar’s with me. I’m not scared much about anything, ’cause she’s tough and she’s MY friend! She’s taught me how to like myself, how to give to others, how to smile with my soul rather than just my face, and how to trust. I owe her a lot.

Love you much, Snookums! Happy anniversary!